The honey bee sculpture that graces the Häagen-Dazs Honey Bee Haven at the Harry H. Laidlaw Jr. Honey Bee Research Facility at UC Davis is bee-u-tiful. It's the work of nationally renowned artist... 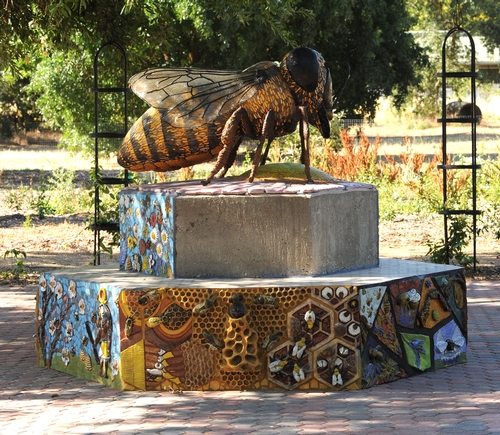 THIS HUGE BEE sculpture at the Haagen-Dazs Honey Bee Haven is the work of nationally renowned artist Donna Billick, based in Davis. Those who donate $1000 to the honey bee haven will have their names placed on ceramic art tile below the sculpture. The deadline to pledge is July 20. (Photo by Kathy Keatley Garvey) 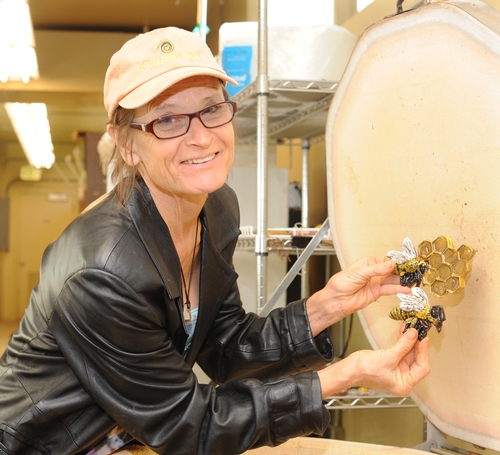 NATIONALLY RENOWNED ARTIST Donna Billick of Davis created the bee sculpture at the Haagen-Dazs Honey Bee Haven. Here she shows some of the ceramic art work for the haven. (Photo by Kathy Keatley Garvey) 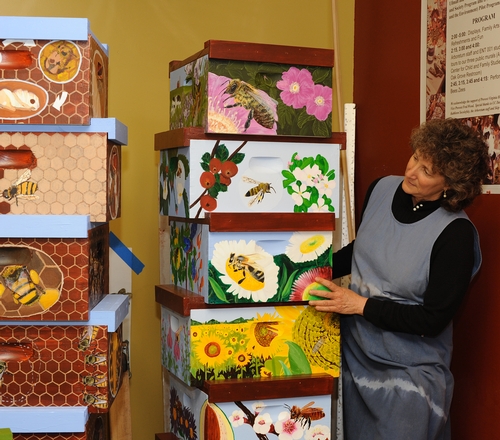 DIANE ULLMAN, an artist and an entomologist, shows the beehive sculptures created by the UC Davis Art Science Fusion Program. Ullman and Billick founded and direct the program. Ullman is an entomology professor at UC Davis and the associate dean for undergraduate academic programs at the College of Agricultural and Environmental Sciences. (Photo by Kathy Keatley Garvey)
Posted on Tuesday, July 13, 2010 at 6:58 PM Ants, bees, flies and other insects--and people--ought to scatter from the Briggs Hall lawn on the UC Davis campus, on Friday afternoon, July 16.That's the date of the eighth annual Bruce Hammock Lab... 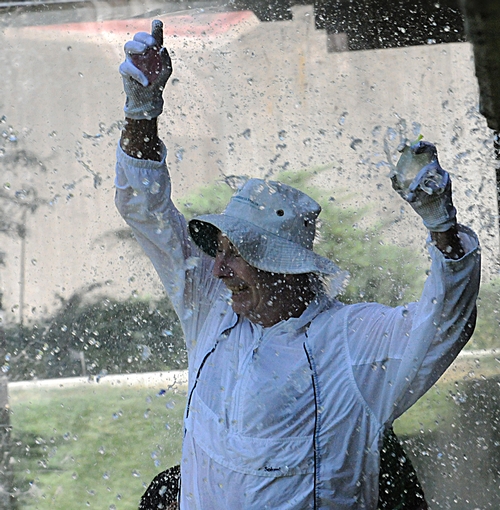 DISTINGUISHED PROFESSOR Bruce Hammock of the UC Davis Department of Entomology gets doused with a series of water balloons at last year's water balloon battle but emerges victorious. (Photo by Kathy Keatley Garvey) 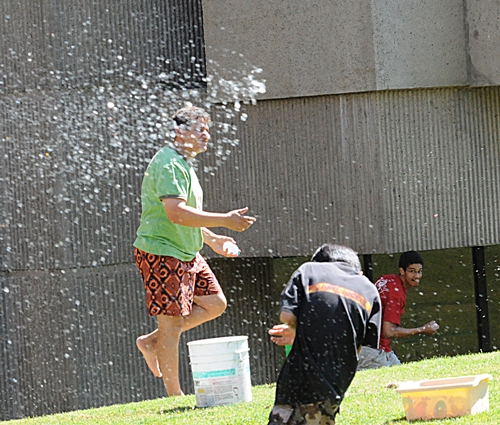 As a child growing up in Washington state, I received an entomological nickname."Katydid."My father, in a take-off of the name, Kate, affectionately called me "Katydid."Katy did. Katy didn't.Maybe... 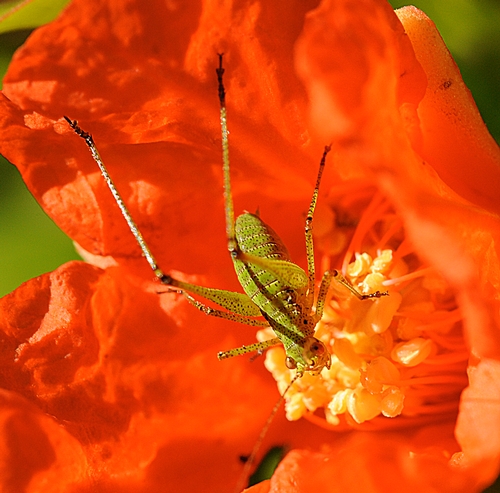 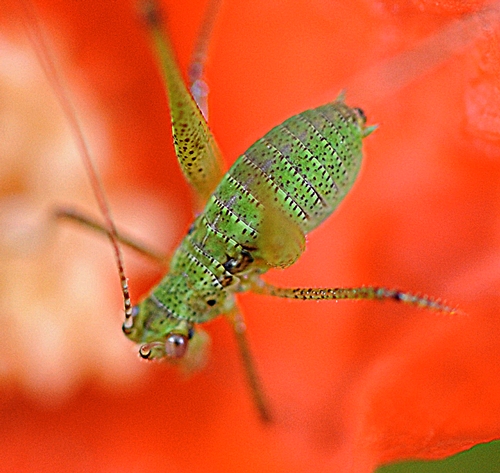 Buzz from the Rooftops It was bound to happen.As soon as New York City lifted its ban on backyard (and rooftop) beekeeping, scores of folks began making a beeline to take classes from the New York City Beekeepers'... 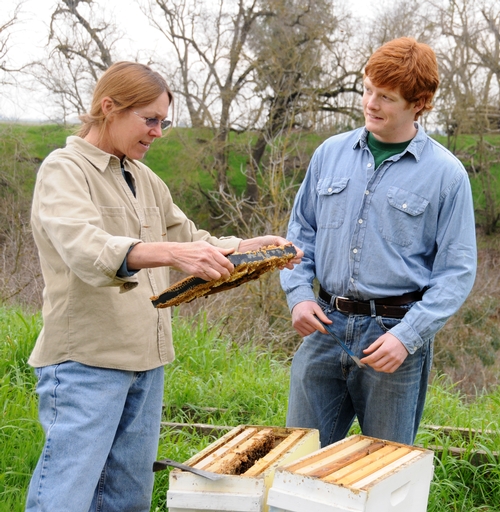 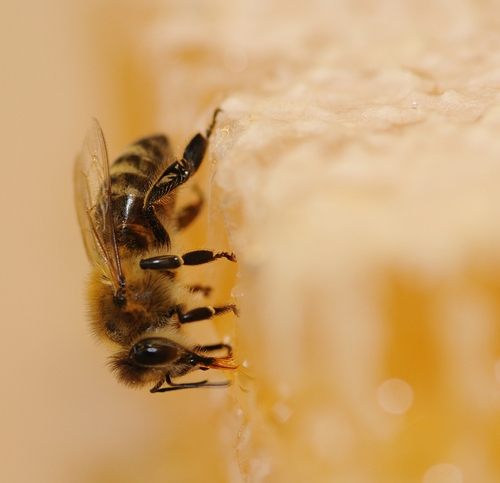 THE HONEY BEE is the object of much attention, as urban beekeeping takes hold. (Photo by Kathy Keatley Garvey)
Posted on Thursday, July 8, 2010 at 9:34 PM

From the UC Apiaries

Extension apiculturist Eric Mussen of the Department of Entomology, University of California, Davis, writes an interesting bimonthly newsletter.He's been writing from the UC Apiaries since he joined... 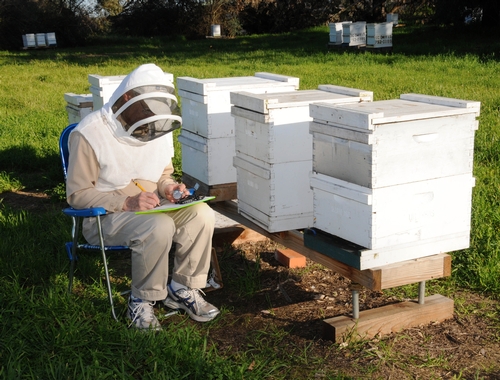 ERIC MUSSEN, shown here at the UC Davis apiary, is a noted expert on honeybees and their health. He writes the bimonthly newsletter, "from the UC Apiaries." (Photo by Kathy Keatley Garvey) 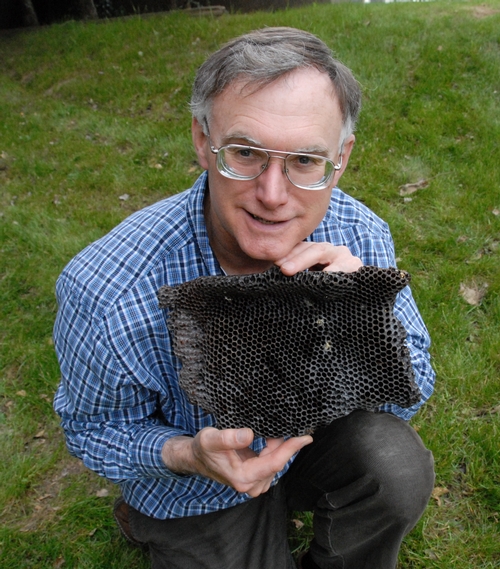